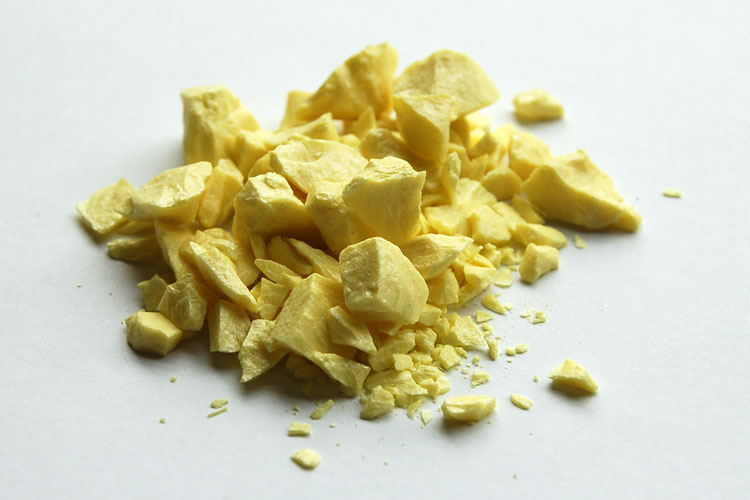 Sulfur is a chemical element that is non-metallic. It has a pale yellow color and has no odor. Sulfur in gaseous form combines with oxygen to form sulfur oxide. Sulfur is used to make fertilizer and various types of disinfectant. It is also used in medical laboratories to test skin disease. Sulfur is, however, a hazardous element that should be handled with care.

Sulfur in a gaseous state mixes with oxygen to form sulfur dioxide, which is hazardous. Inhalation of sulfur fumes causes irritation of the eyes, nose and respiratory track, which leads to headaches, dizziness and nausea. High levels of sulfur can burn the skin, and it can also cause pulmonary edema, a condition in which the lungs are filled up with fluids. Inhaling sulfur may also cause coughing, sneezing or labored breathing.

When sulfur dust comes into contact with oxygen to become sulfur dioxide, it has serious environmental hazards. It affects the living organisms around the area. Sulfur causes vascular damage in veins of the brain, the heart and the kidney. Sulfur can also cause damage to the internal enzyme systems of animals.

Sulfur is Combustible and is an Explosion Hazard:

Fine dust of sulfur dispersed in the air is a potential hazard. When sulfur dust mixes with oxygen, it forms sulfur dioxide, which when ignited causes explosion. Dust suspended in air is readily ignited by fumes or static electricity and can cause destructive fires. Fires caused by sulfur are hard to put out because once they spread the presence of oxygen only serves to increase the fire.

Sulphur is a flammable substance in both the solid and liquid states. The dust is characterised by a very low ignition point of 190°C compared to other combustible dusts, and dust clouds are readily ignited by weak frictional sparks. Dusts containing 25% or more elemental sulphur may be almost as explosive as pure sulphur.

Which Industries are at Risk with Sulfur?